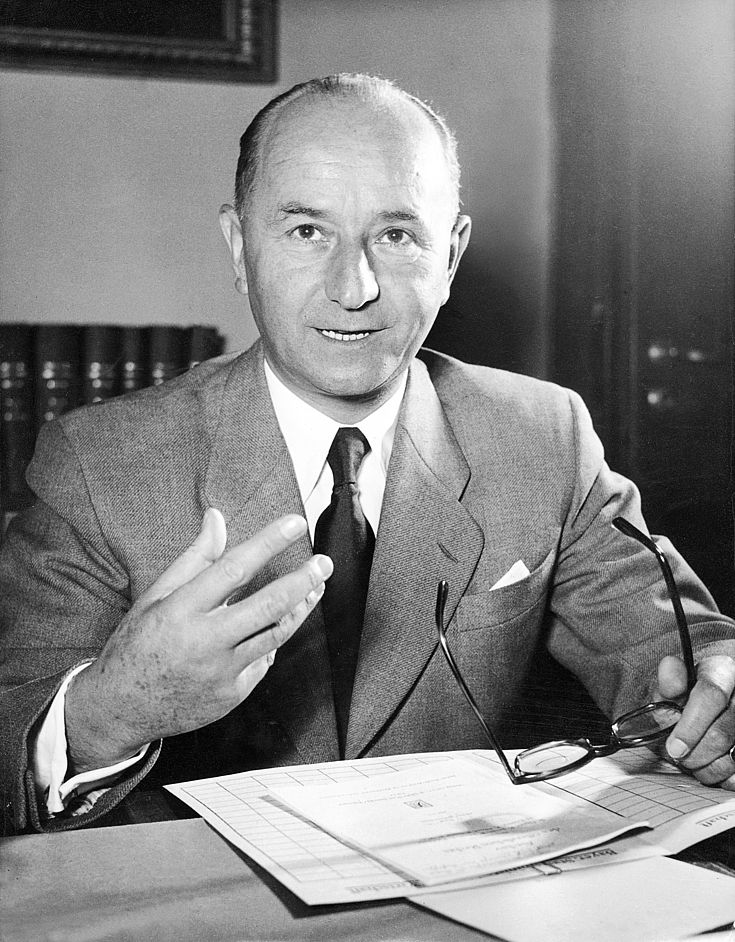 Hanns Seidel began a fundamental modernisation of the CSU

Hanns Seidel (1901–1961) was born in the Bavarian town of Aschaffenburg and earned his law degree in 1929. He became a member of the Bayerische Volkspartei (BVP) in 1932 and the next year ran in the city council elections in his home town. After the Nazis took power, Seidel was taken into “protective custody” because he had been protecting a large number of Jews. Hanns Seidel served in the military from 1940–1945. Once the war was over, the American military government appointed politically respectable Seidel District Administrator of Aschaffenburg. In 1946, he successfully ran for election as a CSU candidate for the Constituent Assembly and the Bavarian Landtag (state parliament).

In September 1947, Prime Minister Hans Ehard appointed the expert Hanns Seidel Bavarian State Minister of Economics. The CSU parliamentary group elected him their spokesperson in 1954, making him the opposition leader to the Coalition of Four (SPD, Bayernpartei, FDP, GB/BHE). In 1955, as the new party chairman, along with his Secretary General, Friedrich Zimmerman, he began a fundamental modernisation and reorganisation of the CSU. When the Coalition of Four collapsed in 1957, the CSU once again formed a government and the Landtag appointed Hanns Seidel Minister President of the State of Bavaria by a majority. The population rewarded Seidel’s expertise and gave the CSU its best outcome since 1946 in the 1958 regional elections with nearly 50 % of the vote. It was with great regret that Seidel was forced to
resign as Minister President in 1960 and CSU party chair the following year due to a back injury he suffered in an
accident. Hanns Seidel died as a result of his injuries on 5 August 1961. A few months later, planning began for a
foundation affiliated with the party and was named after Hanns Seidel.