Aus dem Inhalt: Li Gongzhen: “Germany‘s Earliest Reevaluation of Nazi Totalitarianism and its Historical Legacy”; Arnd Bauerkämper: “National Remembrances and the Emergence of a European Memorial Culture: The Twisted Road to Reconciliation between the Germans and their Neighbours after the Second World War”; Cha Ha Soon: “Is Reconciliation Feasible at All?”

On September 4th and 5th, 2010 the Chinese Academy of Social Sciences (CASS) hosted an international conference on '"Historical Reflection and the Process of Reconciliation in East Asia and Europe after World War II'". The conference explored the similarities and differences in both regions between the processes of coming to terms with the past and the rapprochement between once hostile nations. Academics from twelve countries - including China, Russia, the United States, along with East Asian, Western and Eastern European nations - participated in this event, bringing to the table a wide range of perspectives on an issue whose political impacts can be still felt today. 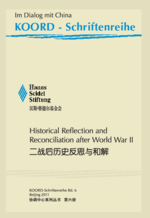