Aus dem Inhalt: Li Gongzhen: “Germany‘s Earliest Reevaluation of Nazi Totalitarianism and its Historical Legacy”; Arnd Bauerkämper: “National Remembrances and the Emergence of a European Memorial Culture: The Twisted Road to Reconciliation between the Germans and their Neighbours after the Second World War”; Cha Ha Soon: “Is Reconciliation Feasible at All?”

The celebration of 30 years of development cooperation between the State of Bavaria and Shandong Province
Conference Report: International Conference on Integrated Development of Rural Areas and Territorial Governance

Conference report: This conference was organised to celebrate the 30 years of cooperation between the State of Bavaria and Shandong Province and aimed at facilitating the exchange of opinions on the integrated development of rural areas and the role of territorial governance. It was attended by around 90 participants from various countries including high-level ministry and provincial officials with Mr. Horst Seehofer, Prime Minister of the State of Bavaria and Mr. Wang Shujian, Vice-Governor of Shandong Province, as special guests. 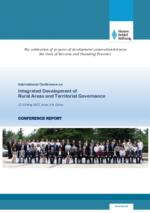